Cliché knitters and pigeonhole carpenters are now off duty. The 24th BIKE Transalp is not only a new edition, it is completely new again, especially in its mix, completely different from the other 23 before. For the first time the Transalp starts in East Tyrol and stays there for a whole day between Lienz and Sillian. Bruneck is a brand new stage location that offers the possibility of building in the Kronplatz, a peak long conquered by bikers but never before by the Transalp. The combination with nearby St. Vigil, one of the most frequent stage towns in Transalp history, offers possibilities that were not there before. St. Vigil itself was always approached from the Eisack valley, usually from Brixen. Now the route goes the other way round from St. Vigil to the Eisack. Kaltern and San Martino di Castrozza have also often been stage locations. But they have never been connected with a stage. The result is a route that is unparalleled in Transalp history. Many things are new and unpredictable - and no stage is like the other, they are not even similar. Is it a Transalp on beautiful panoramic trails for kilometre-eaters and climbers? Yes, but not always! Is it a Transalp for trail fans who would rather have a rollercoaster ticket than a race number? Yes, but not always! There's everything in the 2022 Transalp: distance, altitude, adrenaline. But it's all very irregularly distributed. That makes it as exciting as a BIKE Transalp has to be. 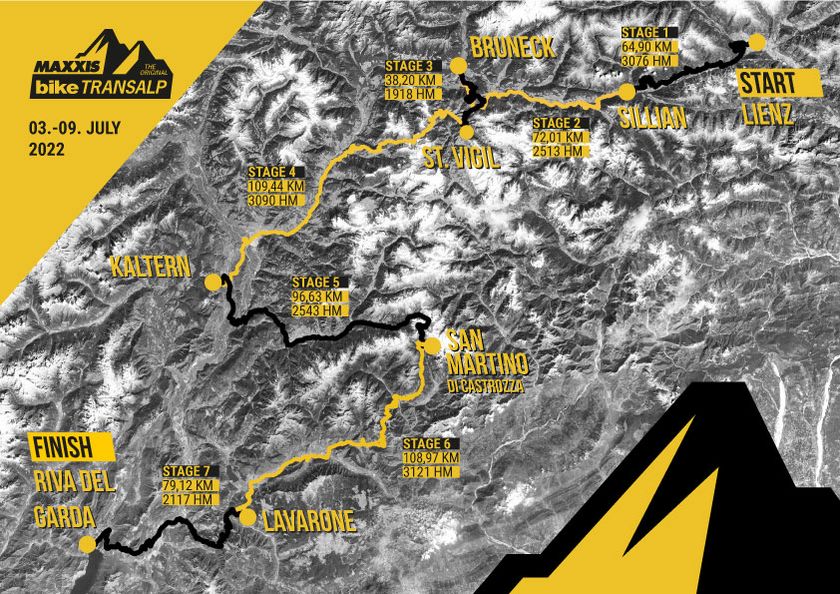